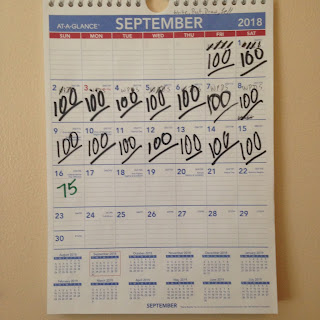 After a lifetime of adjusting my time management / organization / planning options to fit the current vibe, I have taken one step back and fallen into the arms of on an old friend that I thought was long gone…the plain paper wall calendar. Yep. This tried and true tool hasn’t been in my house for ages and now I’ve found a good use for it in spite of my phone, planner, and reminder lists.

What’s also something I never thought about is how the a traditional calendar would actually become a visual distraction. I’d be focused on something, and then I’d start thinking about two days from now, a week from now, or next month. Before I knew it, I start to wonder about something unimportant way down the line that really wasn’t important. I have my digital calendar for that. (Hmmm…is it walnut season yet? Maybe I’ll learn how to make banana bread for the holidays this year.)

So why did I bring the calendar back like this? Two reasons: Accountability and Completeness.  I made an earlier post about crossing off days of the year as a given task was habitually completed. This worked out well, but since it was an app, I could just turn my phone off, or not think about it. What about the notifications? I would just turn them off. What I needed was a tool that stared me in the face and made me work and maintain focus instead of distracting me with events. Because now? There’s only one event for the day. And that is to keep it 100.

So that brings us to the second reason. I had to use the “100”. Psychologically, the idea of “keeping it 100” resonates so much better to me than the common red ‘X’. That felt to me like days were being checked off in prison or like I needed to cross the day out from memory. I suppose a check mark would have been suitable, but come on buddy, you know when you really didn’t do your job and you just wanted your participation trophy. It’s like when a kid tells you that the floor was swept, but only one dustball was pushed under the rug before the PS4 was back on. That’s a check mark, but not keeping it 100.

So there you have it. Me getting things done by using an old school tool based on a new school phrase. 💯

P.S. I was actually pretty happy with the progress made on Sunday, so I felt good enough to call it a wrap at ’75’ and go to bed.