He Said He Didn’t Like Cartoony Art, I Went Full Toon 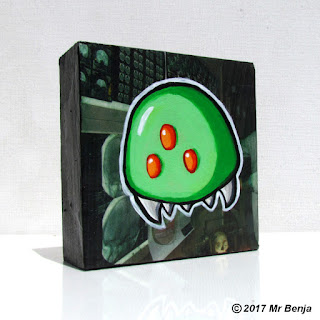 Most modern artists will end up having to talk to this special class of people called gallerists. They are the gatekeepers that get you in and out of the art scene. Here’s a brief discussion I had with an LA gallerist:

Gallerist: “I like your art.”
Me: “Thank you.”
{fifteen minute (or more) art networking jibber jabber ensues}
Gallerist: “Hmmmm…well…we don’t do cartoony art.”
Me: “Well thank you for your time.” *

My art has been called many things “fun”, “colorful”, “whimsical”, “saturated”, “odd”, “anime-like”, and so on, but this was the first guy that ever used the word “cartoony”. At the time, my work wasn’t *that* toon-like to me. So the gallerist’s statement stuck out. If the cartoon label was the sticking point for this person, it could also the focal point for other people. By pushing my art even further in the cartoon direction, I would attract more people that would recognize the pop art influences.

For my purposes, I’ll call it “toon-shading”.

While it makes sense to me, I actually have to be more careful about making sure that I I’m communicating that I have more that surface visuals going with my art. This isn’t just eye candy or something “fun” to me. People’s gut reactions are to be expected, but I have to be careful about falling into holes I can’t get out of…like the bad pop art hole.

Anyway, maybe the toon-shaded look won’t work out and I’ll have to go with something else. Maybe it will work out, and I’ll suddenly be that cartoony guy. Either way, the art isn’t having the desired conversation, then I have to change what I’m saying with it. Such is the way.

*Note on talking with gallerists/galleries:
The quick back and forth is basically how a good portion of art meetings with galleries go, and that’s okay. You can replace “cartoon art” with whatever sticking point they have. They want to keep people interested and they want to have a stable of artists around that they can use, but they usually don’t envision a use for you right away. It’s a timing and numbers game. I’m not mad at it, but it can be annoying.

Also, it’s not that I wouldn’t work with that gallery guy in the future, but there were more promising opportunities to pursue at the time. Anyone looking to get into a gallery or museum situation should  build a relationship with that gallery and take their time. Leave doors open for working with gallerists, but don’t waste time going on a fool’s errand.