Being that I have a mind that pushes boundaries, I like to think I get comedy. Aside from being fucking hilarious at dinner parties, I did three summers worth of standup at the ACME Comedy Club in Minnesota. (Shout out to Nick Swardson who showed me what it means to be made of puuuurreeee eeeevilllll and to Victor Varnado who showed me what it meant to embrace the “fuck it” attitude.) Also, it’s healthy for us to look at all sides of an issue.

Now before I continue, CLICK HERE TO EDUCATE YOURSELF ON THE STORY. You can also check his Instagram to see his statement on the matter.

But calling him right wrong isn’t my point here. It’s about crossing lines.

I’ll start with this quote from the legend George Carlin, which may or may not be from him. He hasn’t responded to my tweets, so I can’t verify this part. 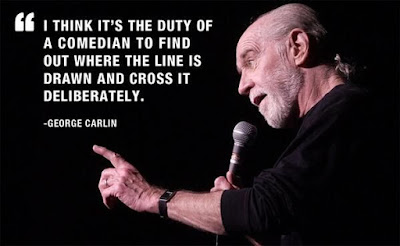 Okay. So was Ari Shaffir simply crossing lines that should be crossed? Was he just trolling? Because he really does troll people, but not like this.

At face value, line-crossing in comedy is fine. The craft is not necessarily about being “funny” or acceptable. The comic should be out there picking fights, ruffling feathers, making people think, pushing buttons, and even bombing in the presence of innocent civilians. (See what I did there?)

I mean that. For example, here are popular topics that comics SHOULD broach:

It’s all on the table. That’s how it’s supposed to be.

But the question is… HOW ARE YOU CROSSING THOSE LINES AND WHY?

Are you helping anyone? Did you make anyone think? Were new opinions formed? Did a reasonable dialog come up? Was it worth it?

See, this whole situation annoys me because I honestly can’t stand our war on comedy. We’re are a bit soft nowadays. We need comedy now more than ever. I want people to go outside without having anxiety attacks. Unfortunately, we’ve got Ari Shaffir going around making the situation worse. Even shock outlet Opie Radio had to call him out.

At its best, comedy like this is lazy. At its worst, it’s dangerous. Comedy is a powerful weapon that should only to be wielded by licensed skeptics, cynics, outcasts, and socially-malnourished intellects.

But wait. You don’t think bad comedy can be dangerous? Remember the time Ari spoke about showing his privates to a six year old girl? Ehhhh…come on, dude. Do better.

So regardless of my personal feelings or my thoughts on celebrity worship, the “joke” failed because it was delivered improperly. It didn’t help the case for art. It just seemed like some guy channeling his inner jerk. I don’t know, maybe his career implosion can be used to open the door for better post-death comedy.

Finally, while I didn’t want to come on here and stan for Kobe. I have much respect for the Black Mamba, so RIP to Kobe Bryant, his daughter Gianna, and everyone else that died.
Click here to learn more about the lives that were lost.