I Didn’t Know How To Win, So I Upped The Difficulty Level 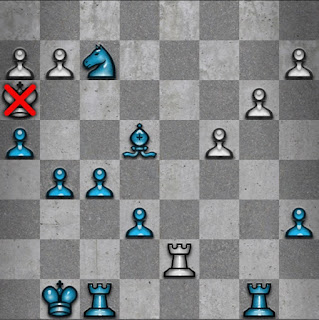 I was playing this chess game on my phone, and I got into a funk where I was continually losing. It had gotten past the points of frustration and disgust. I was getting bit turned off by the idea of playing. And on a deeper level, I was starting to have thoughts that I had reached the limits of my expertise. I knew that wasn’t true, but I started to feel that way.

I tried switching sides, changing strategies, altering my play times, adjusting the board color, and so on, but nothing seemed to work. I just started digging myself in deeper and deeper into this loser mindset. But then I realized something vital…I’M BETTER THAN THIS. See, I’d had that feeling before. It was nothing more than mental restraints of my own doing. By getting into the right mindset, I could move freely.

At the time this dawned on me, I was lying in bed, resting from a long day. While I was in no mental shape to play a difficult game of chess, I powered up my phone and did the one thing I hadn’t yet tried. I turned up the difficulty a few levels…far past where I had ever played before, let alone conquered.

I was playing black, and after the first couple moves, I realized that this was a different beast. My concentration went up. This new computer opponent was coming at me with more devious plans than I had expected. I sat up in bed and took notice. I thought about moves and made the ones that felt right. I was fully engaged. This match was bringing out a newfound intensity that I thought had gone away.

When I made my final moves and checkmated the opponent, I sat back and reflected.
Nothing had really changed.
But yet, everything had changed.