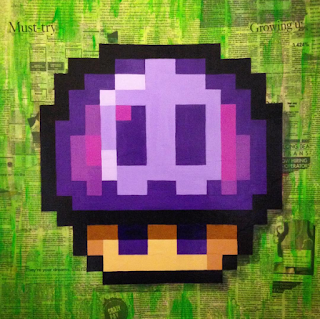 I never liked pixel art as an aesthetic. For the most part, I felt the look was a bit kitsch. It felt like an odd throwback to the days of retro video gaming and bad graphics. (Because it was.) And that’s not to say I disliked pixellation, I just didn’t have a strong affinity for it. I feel the same way about polka-dots and most electronic dance music. In the 2000s and the early 2010s, I’d seen many uses of the form on Etsy, on Tumblr blogs, at conventions, and in indie games.

My own venture, The 8-Bit Cubist, attempted to be something interesting in terms of art that respected people that came from that era, but was not “geek” in the traditional sense. We strove to be more than kitsch. In fact, We heavily restricted the use of pixel art as a way of expressing ourselves. The 8-Bit referred to where we came from, not a definition of a visual or stylistic period. So in that sense, using pixels (what are literally 8-bit graphics to people) would have confused the message.

But recently, I’ve rethought what the look means to people in 2017. I believe that we’re far enough away from the hipster-retro aspect of pixels, that I can confidently present the look without communicating the wrong thing. The hand-painted pixels can be seen as representing art created traditionally in contrast to computer generated images that no longer maintain such a primitive look.

It’s a continuing study into a complex conversation about the reality and the fantasy, the timeless and the temporary, the organic and the synthetic, and of course, the medium and the message.