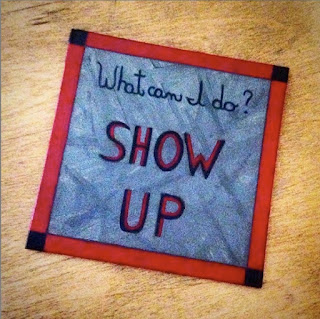 A year and a half ago, I found myself at an art fair and discussing my frustrations with getting the kind of traction I wanted as a creative. My art friend/mentor decided to give me a few of her motivational works. Apparently, I had motivated her in some way, so it was a fair exchange. While she does really nice artwork, she likes to bang out these quickie sayings for fun. I didn’t particularly want them (I thought they were a bit cheesy for my walls), but I graciously accepted them.
A little later, I pick one up from my desk and put it up on the wall because it was taking up space on my desk and needed to be moved out of the way. The “Show Up” painting stayed there for months.

Then comes the day Art in Bixby Park. I REALLY didn’t feel like going, even though I had already applied and set aside the day. I got out of bed to pick up for my phone from the dresser. I was going to text the coordinators and let them know I was bailing. That’s when I looked at my sign: “SHOW UP”. Shit. I sat in bed for a bit pondering our discussion and reluctantly packed up my things and made my way to Art in Bixby Park.
It ended up being a lackluster day for a while, but then I turned the vibe around and started talking to people and getting excited about being out there. Because what else was I going to do? Sit around being lame? At some point, someone stopped by and left a card with me. It was fantasy and young adult author, Holly Stacey.
I ended up following up with her and that led to me making several breakthroughs for Transcendent Press and meeting a completely unique set of people in the writing world. It’s currently the reason why I have been making the next set of short stories.
So yeah. SHOW UP. The whole attraction thing might just kick in, and whole thing might end up being well worth your while.