What Kind of Parents Created Me? 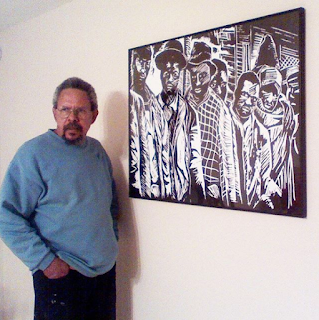 So…I really got into creating online because of the ability to share the interesting people and experiences that I was coming across. I have some images that I don’t usually show. They’re always on my mind and will accompany my other posts. We’ll see what happens.
This is my father Earl alongside one of my favorite image of his, a block printed painting known as “The Line”. I found a photograph of the image and recreated it on the computer and got a large print made for his birthday. You can’t tell here, but he’s really happy about it. :).
I’m actually reminded of “The Line” as I see places like Wal-Mart and Ralph’s with huge queues of people stretching around the block for some canned goods because yeah, everything is crazy right now. 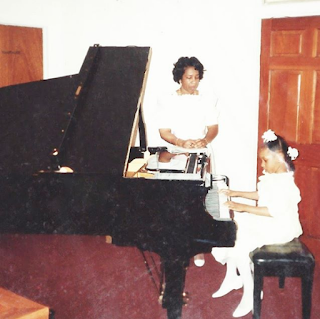 The other half of my major influence is my mother, Shirley. All my life I knew her as an opera singer and professor of music at Florida A&M University. More than that, I knew her as an educator and a student. She was always on the hunt for knowledge and was willing to share it to everyone in her environment. Also, that’s not a college student in the pictures, btw. She also taught young ones in few moments of “spare” time. Interestingly enough, she was strict, but never pushed the arts on me as the end all and be all of life. In fact, when I expressed interests in computers and video games, she was all for it even though it really wasn’t her ballpark.

Dr Shirley showed me how to fight the fight to get to where you want to be. How to get around the obstacles. And how to get your music heard.